Over the last 12 months, the Minova Australian Technology Team have been working closely with their Orica counterparts to develop and trial new uphole stemming technology which supports certain Webgen applications.

With the appropriate travel approvals, David Bogle, our Quality Development Technician, travelled to Indonesia to ensure this critical new business opportunity was not stalled.

The second series of trials was scheduled to take place mid March in the midst of a rapidly changing world due to the COVID-19 pandemic.

David carried out training to the local Freeport Mine crews and assisted with the uphole stemming of the Webgen blast trials.

However, during his stay in Indonesia, the COVID-19 situation impacted his planned return home.

The Timika Airport closed on the day of his departure and it looked like he was stranded in Indonesia.

With the support of the Indonesian Orica team, other flight arrangements were provided to David.

He successfully returned to Sydney on the 31st March, where he is currently spending two weeks in mandatory isolation in a Sydney hotel.

Despite the uncertainty surrounding his return to Australia and being away from his family for much longer than expected, David has remained at all times positive and in good health and spirits.

With a week still remaining of his isolation, David has shared with us some photos from his hotel room including one of him making Easter Bunny Hat for his daughter's Easter Hat Parade, using the items he could find in his hotel room: 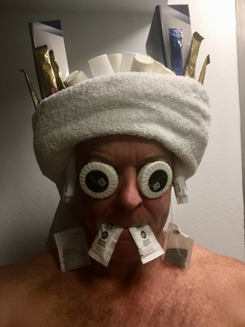 With the upcoming Easter holidays, which will be spent away from his family we would like to acknowledge his willingness to travel in the midst of COVID-19 pandemic to support this vital project.

David, your spirit truly captures our values - we hope you will be reunited with your family soon!